Knife Attack Up Against A Wall

Knife Attack Up Against A Wall

I see a lot of knife defense articles and videos, and most assume that you have a lot of space to move around, move back and even escape easily. Although it is common sense, I never want to overlook the obvious, where if someone pulls out a knife, and I have the space and time to simply turn around and run, I can and should do so.

The first scary situation is if someone has you against a wall, and actually pressing their knife across your throat. I would love to simply parry the knife away in either direction, but because I don’t know which direction the knife is facing, I could literally slice my own throat.

Therefore, the first thing we do is put our hands up. This positions our hands in a better defensive position, and a way to follow up in a safer way. From this position, we want to collapse both of our hands downward and trap the knife hand and arm against our chest.

From there we can follow up with an array of close quarter tools, but with both of our arms trapping their arm, my suggestion is to use head butts and knee strikes. As we are doing that we want to rapidly pull the knife arm back and forth in order to have the opponent get their arm wrenched and drop the knife. If they don’t, continue the assault with your own head butts, knees, foot stomps and even bites if necessary. 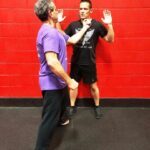 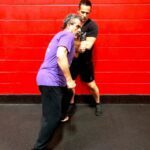 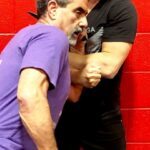 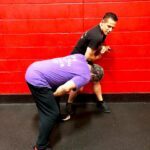 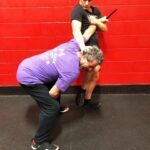 The second situation which we’ll cover here is being pinned up against a wall by our shoulder or upper chest, where the knife is aimed at us but held at a distance. This distance makes it difficult to pull off the first defense strategy, therefore, each of our arms will have a specific task. While we catch the bicep of the attacker’s arm that is holding the knife, we will punch over their arm which is pushing against us.

The trick in this strategy is to push forward with pressure, which accomplishes three goals. First it increases the intensity of our punches as we move in close and closer to the attacker. Secondly, by moving in, it allows us to keep pressure on that bicep, and keep constant contact on it, so we can track it and not lose it. Thirdly, as with most “self-defense” moves, it turns our defense into offense, as it puts the assailant back on their heels.

Obviously there are other “against the wall” attacks, but these two are some of the more common ones. Work the mechanics of each of these individually, and then have your training partner mix them up and feed you both left and right handed attacks. Increase speed as confidence and success increases.